Many years ago, I used to use ACDSee for image viewing and have since switched to Faststone Image Viewer.  Not all that long ago, I had sent an email to their “comment box” with praise and a suggestion (the praise was to hopefully get my suggestion implemented).  Despite not hearing back from them, it didn’t stop me from brainstorming solutions to my problem.  I have found a way to address my needs, by writing a utility.

To summarize my request, I was looking for some sort of photo management like “albums” or “collections”.  For a pure image viewing application like Faststone, I can understand the trepidation the developers would have in implementing that feature.  It would be sure to divide their userbase as to whether it was done properly and whether it should have been done at all.

You can organize photos into folders on your hard drive, sure, but what if you want a photo in two or more albums?  You have duplicate files wasting space and possibly getting out of sync.  So my suggestion was that the file browser in FastStone have the capability to parse windows shortcuts, which are just LNK text files with pointers to the original file.  That way, you could put shortcuts into album folders and keep the originals where they are.

Recently, I stumbled on the concept of symbolic links, which are like shortcuts, but operate at a lower level.  A symbolic link looks just like a file to an application.  It doesn’t know any different.  By using symbolic links, I could get the functionality I needed with no application changes to Faststone.  I tested this concept and it was completely successful.  So I set about trying to figure out how to build something that I could use with Faststone.

Faststone has a way to call external applications for editing photos.  I could use this same feature to call a utility to generate symbolic links in a selected folder.  My first version of the utility was very simple.  It simply opened a FolderBrowserDialog and wrote links for the files specified on the command line.  However, FastStone had a limitation.  It would not send multiple filenames on a command line.  Instead it would call the external application over and over, once per selected file.

The second version of the utility would capture the multiple calls and write the links in one pass, as long as you left the dialog open until Faststone was done calling the external application.  This was ok, but I couldn’t get any visual feedback on how many files were queued up while the dialog was open.  So I had to create my own folder browser and use my own form which would not be open modally.

As with any attempt to recreate a standard windows control. the results are less than perfect, although serviceable.  The result is a utility called HardLinker.  HardLinker will remember the last folder you used as well as the size of the window.  The files queued will climb as the utility is called multiple times. 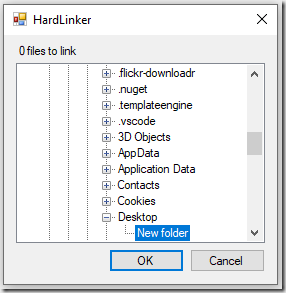 Under normal usage, you need to be an administrator to create a symbolic link, so HardLinker needs to be run as an administrator.  However, in Windows 10, now you can enable developer mode and create links without being in admin mode.  See: https://blogs.windows.com/windowsdeveloper/2016/12/02/symlinks-windows-10/ for more information.

So, in addition to calling HardLinker from Faststone, I also added a shortcut to the utility in my SendTo folder, so I can use it with Windows Explorer.  Calling it from Explorer is very fast since all the files are on the command line and you don’t have to wait for the multiple instances to keep spinning up.