In another hobby of mine, CD collecting, I utilize a few different tools in my collecting and cataloging process.  One of which is Exact Audio Copy (EAC), which I use to rip the CD audio to my computer.  When you collect early-edition CDs as I do, you might run into some CDs that had a special equalization called pre-emphasis, which requires you to apply an inverse equalization to the files after ripping.  Additionally, some early CDs had track subindexes, where you could jump to defined sections within a long track.

EAC, while being a good ripping program, is not able to identify either of these special features, which is why I also use CUERipper.  CUERipper is a part of the CUETools suite, which is an open-source program for ripping, authoring, and modifying CUE files.  CUE files are the true index of a CD’s tracks.  They include information such as indexes, track gaps, and pre-emphasis flags.

However, one of the drawbacks to CUERipper is that you have to rip the entire CD to get the CUE file.  Well, you can cancel the rip early, or you can specify an invalid compressor causing it to error out after the CUE generation.  Neither is an efficient workflow.  So, I downloaded the source code and made some changes specific to what I wanted.

Since I was going to run through a large number of CDs to get the pre-emphasis and index info, I wanted a way to only generate a CUE file.  To make the process even quicker, I wanted CUERipper to start the rip as soon as it had the album metadata to use, and I wanted it to eject the CD as soon as it was done with the CUE file. 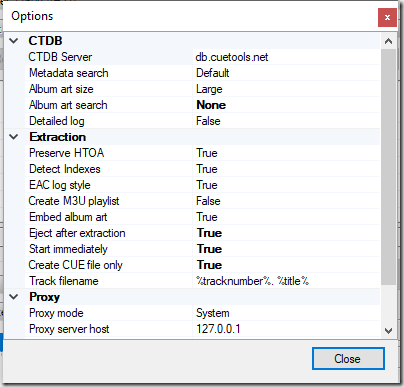 I added three new options to CUERipper, with obvious meanings:

The options are useful even if you are doing a full CD rip, but for my needs, the CUE file generation was reduced to inserting a CD, waiting about 30 seconds while the disc indexes are read, then switching CDs after the tray ejects.

If you are interested in using this modified version of CUERipper, you can download it from here.